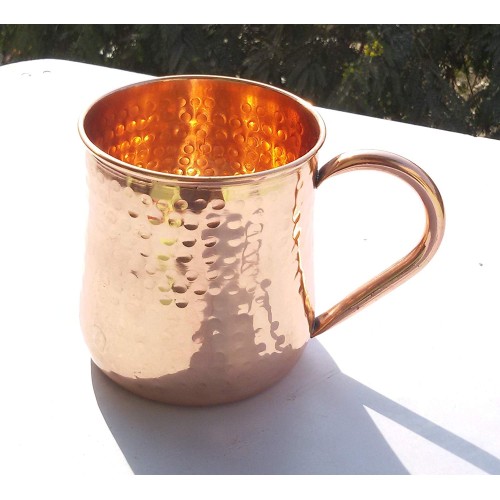 Copper keeps drinks ice cold and for longer period than glass mugsCan be used for mojito, apple martini, cosmo, margarita and all cold beverageDo not microwave, wash by hand onlyThe mugs is entirely handmade by skilled artisan which makes it true to ..

Can be used for mojito, apple martini, cosmo, margarita and all cold beverage

Do not microwave, wash by hand only

The mugs is entirely handmade by skilled artisan which makes it true to the moscow mule copper mugs experience. The mug is 16 ounces the moscow mule is a vodka-based cocktail with the unusual addition of ginger beer. Vodka was still relatively unknown outside russia and central europe in the years following world war ii. Heublein president john martin had recently purchased the smirnoff name and recipe for his american company, and he was out to promote his new product. As the story goes, martin stopped off for dinner and drinks at the cock 'n' bull on sunset strip, where his friend, owner jack morgan, was struggling to sell his homemade ginger beer. Add to the mix another friend who had inherited a large collection of copper mug and a wedge of lime-and you have the moscow mule. Martin combined three seemingly hopeless endeavors into one of the most popular cocktails of the 1950s and early 1960s. He even got stars like woody allen to promote his concoction. to prepare a moscow mule, you will need: - 1 copper mug - 1/2 lime - 2 ounces vodka - 4 to 6 ounces ginger beer, preferably

100% PURE COPPER QUALITY Each mug is made of superior food grade copper. Unlike other generic products that are made of zinc, nickel or stainless with a copper finish. Our 18 oz Beer Steins Mugs Tankards mugs are the real deal and will be ready to ma..

The great way to serve drinks is with a copper beer mug, copper tankard, copper stein because it enhances the experience of the drink. Enjoy using them for mixed drinks with vodka, rum, tequila, gin, whiskey, beer, wine. Our copper stein mugs enhance..

Handmade Solid Copper Plain Moscow Mule Mug 16 oz,This eye-catching, 16 ounce, authentic Moscow Mule mug is 100% solid copper throughout, not stainless steel or nickel. Food-safe lacquer coating both on the inside and outside of the mug to protect it..